Reviews of the Strauss CD 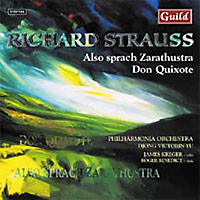 Following my interview with American cellist James Kreger, in Fanfare (39:1), and also the discussion by Jim Svejda and myself of his splendid Guild CD that included concertos by Dvořák and Herbert, the editor noted that the cellist’s recording of Don Quixote with the same orchestral forces and conductor had somehow not previously been reviewed in these pages. I have owned the disc for some years and was delighted to have an opportunity to share my thoughts. It is, so far as I can tell, the only original CD and the only digital recording to combine Strauss’s “Fantastic Variations” with the more flamboyant tone poem inspired by Nietzsche. The Fanfare Archive revealed comments by Richard A. Kaplan (33:5) which note the existence of an old Sony reissue of Ormandy recordings that couples these works—recordings from over half a century ago. This disc, then, is in good company, but seems to be the only modern recording of this pairing.

Although recorded two decades ago (1994, in the splendid acoustic of Fairfield Halls, Croydon) “modern” is surely a fair designation. The engineers did their job well, capturing the mass of Strauss’s orchestral writing, including the warmth of the Philharmonia’s string section (truly world class in Zarathustra). Likewise, all the detail in Don Quixote of the woodwinds and brass, and also the two supplemental string soloists along with Kreger’s cello, are preserved in a superior balance.

Don Quixote is placed second on the disc. Some might consider that disadvantageous after the pyrotechnics of Zarathustra, and for some time that was my view. However, going back to this CD for a few more hearings preparatory to putting my thoughts in print, I have changed my mind. Quixote is much the more profound score (I personally consider it the composer’s greatest) and it is by no means overwhelmed by following the earlier work in sequence.

Djong Victorin Yu, James Kreger’s collaborator in their recordings of Dvořák and Herbert, is not one to rush in either of these works. In Zarathustra, Yu takes nearly five minutes longer than the pioneering Koussevitzky recording from 1935 (Rodzinski took about the same 29 or so minutes in 1947). But the sense I get is one of expansiveness, not lethargy, and never is his control of the orchestra (or the score) in doubt. It is not a showy performance of the work, but ruminative, beautifully played by the orchestra, with superb playing of the violin solos by the great Hugh Bean, leader of the Philharmonia from 1989 into the next decade. This has become one of my favorite performances of Zarathustra, a work to which I listen often.

A few months separated the recording sessions for the two works, and different microphones were used (although in the same hall). There is a difference in sonic focus and also, rather strangely, a difference in volume: The Don Quixote requires an increase in comparison to its discmate. There seem to be no differences in frequency response or orchestral timbre; it just needs to be played a bit louder. As to the balance in this tricky work, not only did the engineers get it just right, but so did Kreger, the conductor, and the other solo players. Kreger’s cello can always be heard, but is not in a concerto-like prominence. He is seated and/or miked such that his tone seems to come from just around the podium, as do Sancho Panza’s commentaries, well played by Roger Benedict (first chair viola of the Philharmonia through the 1990s) and the periodic violin interjections from Bean. To some who may say they want a “louder” or more “present” cello sound, I can only note that what we hear on this disc is precisely what Strauss wanted. Even through murky sonics we can ascertain from his two recordings the balance he wanted. The composer spoke of proper balance in this work often. Kreger’s tone is lovely, warm and expressive, and he too is a ruminative player—sensitive, expressive, and thoughtful in his approach to the complexities of the piece. Technically, he has it well in hand.

In Fanfare 33:2, exactly five years ago, James Miller (reviewing Pristine Audio’s reissue of the famed Feuermann recording) discussed timings in this work. As with Zarathustra, performances of Don Quixote have gotten slower. Miller found that he actually liked the three slowest (out of 11 recordings sampled) the best. They are all around 43 minutes: Janigro and Reiner comes in at 43:03, du Pré and Boult take 43:53, while Ma and Ozawa require an astonishing 45:01. For their part, Kreger and Yu clock in at 43:06. I find this interesting, but in the last analysis not particularly meaningful. A few decades ago, a performance lasting as long as 40 minutes was unusual. Tastes have changed, and I (like James Miller) enjoy both the earlier performances and also those more recent interpretations which take a bit more time. The important thing, as Erich Leinsdorf often reminded students, is that the tempo relationships make sense (especially in such a work as this). If tempos are in balance, the actual speed is secondary. This performance never lingers; it is a thoughtful, moving interpretation.

To anyone with an interest in this coupling (which seems such a logical one, but apparently not to those who plan recordings), in Kreger’s playing, in hearing a great orchestra at the top of its game, all in particularly well-balanced sound of breadth and clarity—a recommendation here!

In a crowded field replete with greats, this disc manages to hold its head high. The conductor is all but unknown to me, while the orchestra is massively familiar (the Royal Festival Hall, the orchestra’s home, is, if not on my doorstep, hardly far away).

There is an unfortunate anomaly, in that the photo of the orchestra on the booklet reverse is in front of the Royal Festival Hall, as previously noted the home of the Philharmonia; whereas the recording hails from the Fairfield Halls, Croydon, a shortish train ride away into the South London hinterlands. Neither acoustic is ideal, actually, so it is good that the Guild engineers have been so successful in maintaining the orchestra’s magnificently warm sound in Croydon, so perfect for this music. Yu also obviously has a keen ideal for texture and detail. Both are heard to maximal effect in the impassioned third section of Also sprach, “Von der grossen Sehnsucht.” The bass pedal of the opening is more felt than heard, surely the intent; the trumpets and brass in that famous opening positively resplendent (the Philharmonia brass is really only rivaled to this day by the London Symphony’s). The hushed delicacy, so perfectly Straussian, of “Von der Wissenschaft,” is wonderful; perhaps the opening of “Der Genesende” could have been more robust, but it gains strength organically as it oozes forth. Yu’s way with the ebb and flow of Strauss’s music, both in Also sprach and in Don Quixote, is entirely natural; of course Karajan and Kempe adherents will justifiably point in the direction of their favorites, but one has to admire the freshness of Yu’s approach. Hugh Bean’s solo violin contributions are a constant source of delight, and Yu brings a lovely, and apt, sense of dance to “Das Tanz-Lied.”

Yu’s account of Don Quixote is beautifully, delicately presented. We may have no high-profile soloists here of the caliber of Rostropovich, but that chimes in with the feel of an ensemble effort. Although scored on a large scale, Strauss’s scores do demand a high awareness of chamber music; not to mention accuracy. Quicksilver moments such as the onset of the sixth variation (“Die verzauberte Dulcinea”) are beautifully handled. Roger Benedict is a superbly musical Sancho Panza (viola), while James Kreger’s cello Don is positively luminous in the finale. Again, Yu’s timing is spot-on (the Viel langsamer section of the third variation, for example). This is a most satisfying Don Quixote; in fact the whole disc seems to penetrate to the heart of Straussian expression.